On a warm Saturday night in downtown Clemson, South Carolina, college students laugh boisterously as they head down a dimly lit street. Perched in the shadows above them, the low hooting of an owl mingles with their voices and goes unnoticed. A female Barred Owl is calling to its mate, enticing it to deliver food to its hungry chicks.

For a long time, the Barred Owl was largely regarded as being at odds with urbanization. An inhabitant of contiguous old growth forest, Barred Owls were considered an indicator species for high quality, pristine woodlands. However, in recent years, observations of Barred Owls in large southeastern cities, like Charlotte and Atlanta, made scientists rethink this assumption. How could a species previously found to avoid human activities now be thriving in our backyards? When I began my research in Clemson, urban dwelling Barred Owls had been observed for the last 15 years, but only a handful of studies had begun to investigate why these owls might be moving into our cities.

While most were sound asleep, my team and I surveyed for owls using with a loudspeaker and recording devices. The speaker played the Barred Owls’ famous song, known as the moniker “who-cooks-for you.” During the breeding season, Barred Owls defend their territories from other owls. This was used to our advantage: the speaker mimicked an intruder, and owls in the vicinity of the call would come towards the sound, becoming easy to spot by my team. Recording devices were also placed on a nearby tree, and Barred Owl calls detected by the device’s microphones could be used to determine whether an area was occupied by owls. The timing of owl calls helped us to refine the most efficient survey strategy for this species. We found that much like the dawn and dusk songs of daytime birds, Barred Owls had two calling peaks: immediately after sunset and 8 hours later.

Scientists frequently use these types of presence-absence surveys to investigate habitat associations of species of interest. In our case, we used our findings to study habitat use of owls along an increasing degree of development. Our questions were simple: What habitats were consistently important for Barred Owls, despite the intensity of development? Did certain habitat features become more important as urbanization increased within the owl’s territory? To enhance our ability to answer these questions, we also deployed GPS transmitters on owls (i.e., location trackers), which allowed us to peer into their lives and observe where they preferred to hunt and nest.

The surveys and GPS relocations gave us some very interesting insight on why Barred Owls might be sharing our cities with us. Most importantly- tall trees are the key. In historic southeastern cities, the warm humid climate enables large oaks to tower over homes and apartment buildings. These trees likely remind urban owls of their natural habitat: gnarled trunks shadowed by thick canopies provide shelter and ample opportunities to nest in rotted bark and cavities. The only thing that differs is the manicured lawns underneath the trees- but even that is reminiscent of the largely open understory of mature forests. Urban Barred Owls depart from their forest counterparts after their preference for tall trees. Undeniable differences between forested and urban environments have trained city owls to take advantage of different habitat features. Urban owls, for example, are more likely to take advantage of hunting opportunities along roads and streams than their rural cousins.

The implications of our study on urban Barred Owls is two-fold. One side of this story attests to the intelligence and behavioral flexibility of this animal. It is a story of adaptation, of hope that even the most elusive creatures may adjust to increasing urbanization if given enough time. Another side of the story has broader implications for us- and what we can do to take charge of our future to ensure that diversity persists despite our increasing footprint on the planet. If certain cities can be welcoming to a deep forest creature- there must be something we are doing right. If it is home to the Barred Owl, it could be home to a myriad of other animals. Could we find a way to enhance the ability of cities to welcome a diversity of wildlife communities? And is the solution to create rich urban forests, with a variety of stand structures and native plants? Additional research on other uncommon wildlife in cities – such as deer, mountain lions, and more, will continue to help us plan for a better future. 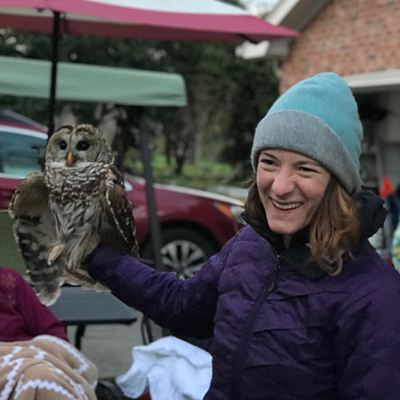 Marion Clément is currently working for the Bird Conservancy of the Rockies as the Mexican Spotted Owl Coordinator. In the past, she also worked for the the U.S. Fish & Wildlife Service on Threatened and Endangered Species. She is particularly fond of doing research on owls; for her Master’s Degree, Marion studied differential resource selection of Barred Owls along a development gradient. On her own time, Marion started a Northern Saw-Whet Owl banding station near her home in Fort Collins, Colorado.

I’m interested in researching how we can preserve biodiversity within developed landscapes, to promote wildlife habitat, conservation, and education. The interactions between people and novel/charismatic wildlife in their backyards is key to promoting grass-root conservation. A little done by everyone can go a long way.

My work contributes to the growing body of literature that shows that we can build cities in a way that mitigates the loss of biodiversity. Cities can provide food and shelter to a variety of plants and wildlife that are beyond those we are most accustomed to (rats, squirrels, raccoons). Not only is this important for conservation purposes- but it also enhances the quality of life of residents and their attitudes towards nature. I worked on private property for most of my research, and many of the residents had neutral feelings about their owls, until we worked together! By learning the life history of these charismatic creatures and seeing them up-close, homeowners gained a new perspective about the benefit of providing wildlife habitat in their backyards. They no longer saw their property as a manicured landscapes for their own recreation, but a habitat they could nurture that could provide so much more.

I am interested in continuing to do research on owls- they are still very understudied. In addition, the reward of sharing my passion with others through incorporating a human-side to my research is huge, so I will likely continued to work along the human-conservation interface. There are many other urban raptors to study!