Better Together: Collaboration Makes for Better Conservation of Nocturnal Birds

“They enter the folds, and fly to the udders of the goats in order to suck the milk, from which injury the udder dies away, and blindness falls upon the goats which have been so sucked.” – Pliny the Elder, Natural History

Every year, thousands of community scientists rise before the crack of dawn to count birds, but they’re unlikely to find one of these odd, goat-sucking birds. You see the “goatsuckers”, or nightjars as they’re more formally called, are nocturnal. Goatsuckers don’t actually feed on goat’s milk though; they’re likely attracted to livestock for the tasty insect buffet. Nightjars use their huge eyes, long wings, and cavernous mouths to catch flying insects by the light of the moon. Despite their oddities, these birds are spectacularly beautiful. They rely on their intricately mottled plumage to camouflage with leaves or branches where they roost during the day.

The problem with this nocturnal behaviour is that when nightjars aren’t reported on annual bird surveys, we can’t tell if it’s because they weren’t there or if they were just sleeping. The Breeding Bird Survey is the cornerstone of avian conservation in North America. Each year since 1966, community scientists count all the birds they can see and hear at each of 50 stops along standardized roadside routes across North America. The information those skilled birders collect is used to identify populations that are declining, to direct conservation efforts, to assess population recovery and management actions, and to assess overall environmental health. But nothing is perfect! There are a number of bird species, including the nightjars, for which the Breeding Bird Survey doesn’t quite fit the “bill” (pun intended). If we don’t detect those species during surveys, then we can’t assess the health of their populations.

So, we thought, what’s in a name? They are nightjars after all. Starting in 2010, we set out to learn the benefits of surveying for nightjars at night. A couple of good friends and I started a trial nocturnal survey program for nightjars under the non-profit organization WildResearch. We followed in the footsteps of the Nightjar Survey Network in the United States, using a subset of the Breeding Bird Survey stops but starting surveys at dusk instead of dawn. As Program Manager, I spent my spare time growing the program from two volunteers in southern British Columbia to hundreds across Canada. I was deeply motivated by the fact that as far as we can tell, nightjars are declining. Several species are listed as being of conservation concern, as are many other species of birds that eat flying insects.

Fast forward ten years and we’ve taken the data from that trial program to show how important these targeted community science surveys are for nightjars. I collaborated with experts in population analysis to determine that the nocturnal surveys are almost twice as likely to detect a decline in Common Nighthawk populations as the diurnal Breeding Bird Survey. The nocturnal surveys also did a better job of revealing Common Nighthawk habitat relationships and predicting where these enigmatic birds could be found. We used the Common Nighthawk as a case study for our analysis because it is by far the most common nightjar in our Canadian study area, but also because the other more nocturnal nightjar species aren’t reported often enough on the Breeding Bird Survey to do any analysis with!

What surprised us, however, was that the best outcome occurred when we combined the data from the nocturnal surveys with that from the Breeding Bird Survey! It took a bit of statistical finagling but including both datasets improved the probability of detecting population changes and the overall performance of habitat models. In other words, the two programs are better together than apart. We suggest there is potential for further synergy in terms of volunteer recruitment and retention, given that the nocturnal surveys use the same survey routes as the Breeding Bird Survey.

Fast forward another two years and our trial nocturnal nightjar survey has fledged to become the official Canadian Nightjar Survey. Our evaluation of the nocturnal surveys garnered long-term support from Environment and Climate Change Canada so that we can help monitor and conserve nightjars. More importantly though, our study emphasized the value and importance of working together at all levels, from collaborating with our communities to survey birds across North America, to working with other scientists to combine datasets. Ultimately, collaboration gives us the power to better monitor the natural world, including our mysterious nightjar friends, so that we can keep the mystery alive. 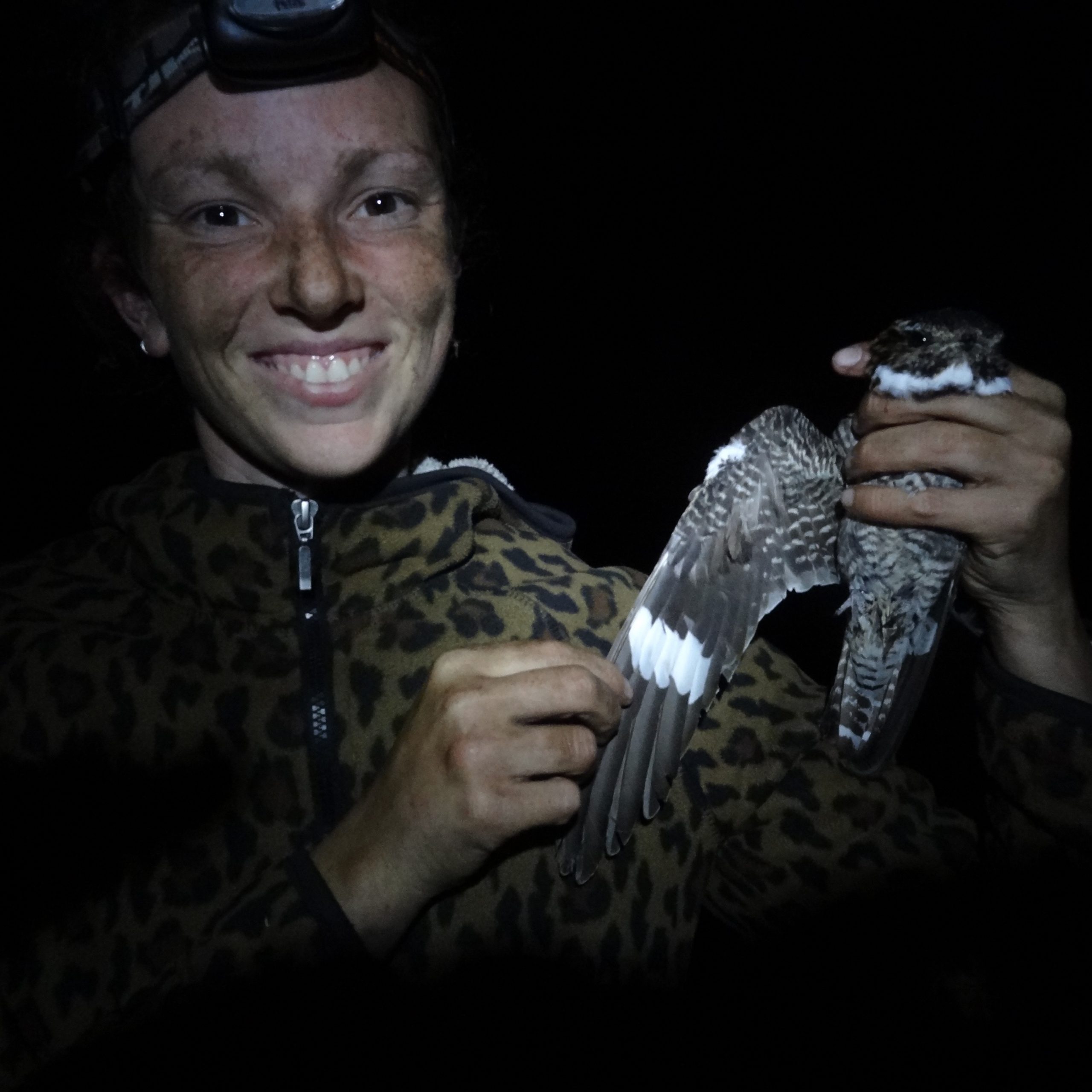 Better Together: Collaboration Makes for Better Conservation of Nocturnal Birds
Nominated by the American Ornithological Society

Elly Knight is an applied ecologist studying the effects of environmental variation on avian ecology to inform when and where wildlife management efforts will be most effective. She believes strongly in collaborative research because it facilitates knowledge transfer, standardizes datasets, and maximizes funding available for conservation.

I have been fascinated by nightjars ever since I first stumbled across a Common Nighthawk nest while working in the sagebrush hills of the south Okanagan valley in British Columbia, Canada. The ecology of this group of unusual birds struck me as a much-needed area of research: the nightjars are poorly understood but also of conservation concern. Working with citizen/community scientists was a great solution to not only contribute to understanding their ecology, but to get people outdoors and raise awareness about how fascinating these beautiful birds are.

Nightjars will always have a special place in my heart, but I am currently transitioning into a Statistical Ecologist position with the Alberta Biodiversity Monitoring Institute, where I will work on developing and maintaining quantitative tools to help wildlife managers and stakeholders maintain avian biodiversity on the landscape. I hope to help integrate new survey techniques like passive acoustic monitoring and new perspectives like migratory connectivity into those tools so that we can improve our collective understanding of how to conserve bird populations.