Responses were judged for their relevance and clarity. Read below to read Dr. Kimberly Boykin’s winning summary, and learn more about her research. 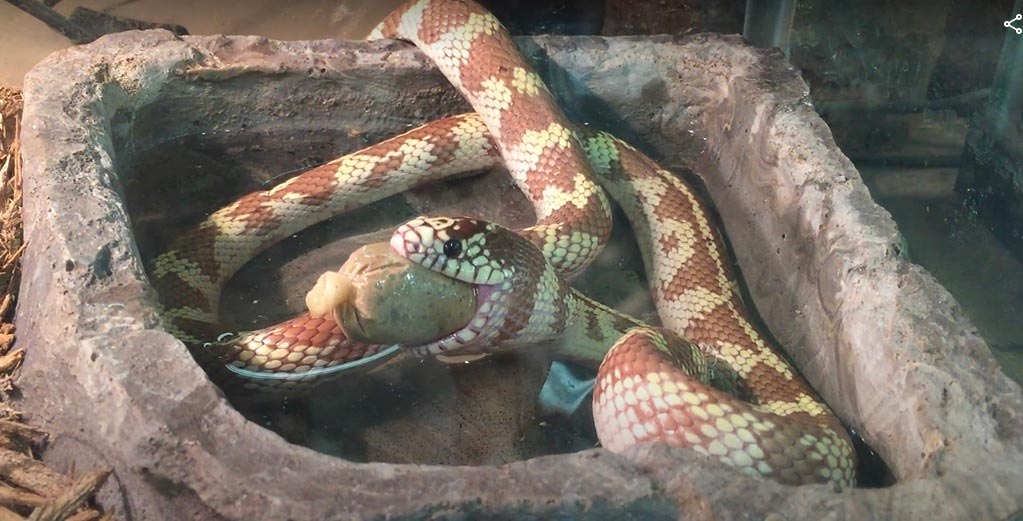 No one knows how the sausage gets made. And honestly, most people don’t want to know. Except for when it comes to sausages for snakes—then people seem to be a little more interested!

If you have ever owned a snake or known someone who has, you are aware that they are oftentimes fed an exclusive diet of small mammals, such as mice and rats. There is very little diet variety available to feed snakes kept in captivity and that is where my research comes into play. If we could get snakes to accept novel food items in the form of sausages, then we would be opening the door to increasing their diet options. In the wild, snakes do not eat just small mammals. Depending on the species, they may also eat birds, eggs, fish, insects, amphibians, or other reptiles. In this study, we fed juvenile corn snakes an insect-based diet in the form of sausages to determine its comparability to a diet of frozen mice. Throughout the course of the experiment, we measured health, growth, and digestive parameters to ensure they were receiving adequate nutrition. We also evaluated the diet’s palatability and the snakes’ acceptance of the diet over time. Encasing various diet formulations in a sausage casing appears to be one of the easiest ways to offer snakes and other reptiles more novel food items and to increase the diet variety that we can offer to them. To my knowledge, this paper was the first to offer snakes an “alternative” diet and to assess their health between various diets. The results of the study were promising, showing that a manufactured insect-based diet produced no ill effects and was still capable of producing adequate growth in juvenile snakes.

This research has larger implications than just being able to offer snakes more diet variety. It is also an important step forward in improving captive snake health. Small mammals and other whole vertebrate prey are very high in calories. Pair that with a snake that has limited opportunity to exercise and you will see obesity become a major concern. By using insects as an alternative protein source, we were able to feed snakes similarly sized meals with 20% less calories, while still providing enough nutrients to support healthy growth. The willingness of snakes to accept a sausage-based diet finally gives veterinarians and nutritionists a way to create specialized diets for snakes and combat illnesses such as liver or kidney disease. Dogs and cats have been able to enjoy the benefits of prescription-type foods for decades; it is about time that we are able to offer something similar to our scaly friends as well.

However, this project was never just about snakes. It has very important implications for human health as well. Live and frozen rodents are capable of harboring harmful bacteria, such as Salmonella. In many cases, mice and rats may serve as the original source for the Salmonella carried by snakes. At least two major recalls of frozen feeder mice have occurred in the United States over the last ten years due to human illnesses associated with Salmonella. Humans can either be infected by handling of the frozen mice directly or from the bacteria being shed through their reptile’s gastrointestinal tract. The benefit of using an insect-based protein source is that black soldier fly larvae (the insect used in our diet formula) are known to be pathogen-free. By using these insects as a main protein source, we have the potential to reduce this ongoing zoonotic threat.

Additionally, insect-based diets allow us to reduce our dependence on vertebrate protein sources. Insects require much less food, water, space, and energy than do vertebrate animals when compared on a pound-for-pound basis. They can also be raised on feed by-products and other waste materials, allowing for more efficient use of our limited resources. As the world’s population continues to grow, we will continue to place more strain on our natural environment. We are constantly needing to produce more and more food for not only ourselves, but also for our pets and livestock. Any effort that we can make now to decrease strain on our food production systems will be beneficial for us in the long run. Plus, the more studies that show insects being used successfully in diets for animals increases the likelihood that government agencies will approve their use as ingredients for humans too. If getting humans to eat bugs doesn’t change the world, then I don’t know what does! 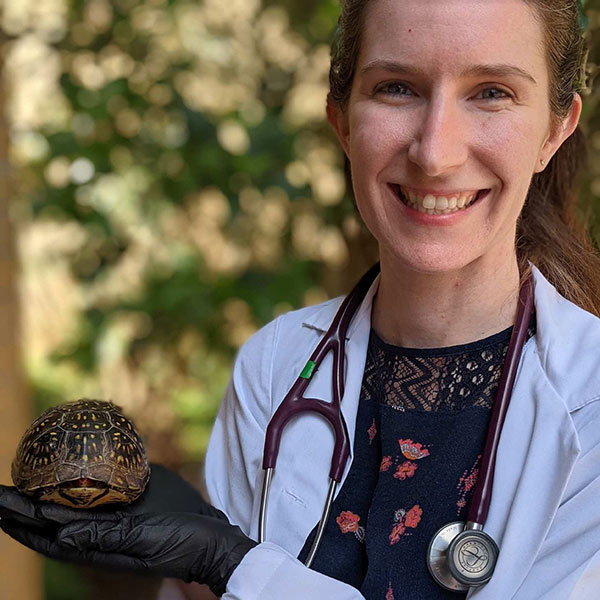 Bon appétit: New Diet Options for Snakes
Nominated by the Association of Reptile and Amphibian Veterinarians
Dr. Boykin received her veterinary degree from NC State in 2016. Since that time she has been at Louisiana State University where she has completed a rotating small animal internship and her masters degree focused on reptile nutrition. Currently, she is working on a PhD in feeder insect epidemiology.

My mentor and I work very closely with Fluker Farms, Inc. (a feeder insect company) to try and improve diets for captive reptiles. For my master’s research we knew that we wanted to focus on assessing the nutritional value of black soldier fly larvae being fed to reptiles. Initially the plan was to focus on insectivorous lizards, but David Fluker (owner of Fluker Farms) had also expressed interest in trying to create a mouse-less diet for snakes. The benefits of such a diet seemed promising (increased diet variety, less zoonotic disease issues, less environmental impact, etc.) so we decided to create a diet using black soldier fly larvae as the main ingredient and designed our study around that.

Insects have been consumed by humans and other animals for thousands of years, yet they are still not recognized by the FDA as being an acceptable ingredient in human or animal foods. A “generally recognized as safe” (GRAS) ingredient submission form has finally been submitted to the FDA. The submission form cites my research (and others) as evidence for accepting black soldier fly larvae as a safe ingredient to use in reptile foods. It is our hope that more insects will be deemed as a safe ingredient for use in several different forms of animal food, thus decreasing our reliance on vertebrate protein sources that are not nearly as sustainable. Eventually, we would like to see insects approved for human food consumption as well. The EU has already taken this step, but the FDA is unfortunately several years behind regarding this policy change.

For information about the Association of Reptile and Amphibian Veterinarians, please visit their website:

Association of Reptile and Amphibian Veterinarians