Responses were judged for their relevance and clarity. Read below to read Dr. Ana González’s winning summary, and learn more about her research.

We can change the world by wisely choosing to drink shade-grown coffee.

Imagine sipping your coffee one morning with no songbirds singing outside your window. This may seem extreme and yet it could become reality. In the last 50 years, Canada and the United States have lost 30% of its birds. This decline will only worsen due to habitat loss and climate change. Many of these at-risk species undertake an incredible 6000-kilometer journey from the Boreal forests of North America to winter in the highland forests of South America. Birds must migrate south during our winter months, because they would not survive low temperatures and lack of food. Their survival strategy depends on overwintering in warmer climes with available food sources. Deforestation in South America’s overwintering regions is the primary reason fewer individuals return every year to North America to breed during the late spring and summer.

What can we in North America do to support the conservation of these critical tropical habitats to stem the loss of our bird population? Simply put, drink only shade-grown coffee. To illustrate the connection between our coffee choices and conservation of South American highland forests, we can look to a conservation icon for both the Boreal and tropical forests, the tiny, ten-gram Canada Warbler.

We have documented the loss of over 60% of the Canada Warblers in North America in the last 50 years. Due to unprecedented rates of deforestation on their wintering grounds, these warblers and other migratory birds have been forced into agro-ecosystems that maintain native trees and provide “forest-like” habitats, such as shade-grown coffee plantations. While conservationists have promoted shade grown coffee plantations as a means to provide much needed habitat, are they really a suitable habitat and comparable to the local native forest? To answer this question, for five years every winter, I travelled to the Colombian Andean mountains tracking the Canada Warbler and assessing where they are most successful.

We captured Canada Warblers in two habitats: the shade-grown coffee plantations and forests. We assessed their body condition (muscle and fat) and documented their rate of survival to serve as indicators of habitat suitability. Birds in both habitats had similar survival rates, which indicates that shade-grown coffee plantations provide suitable winter habitat for Canada Warblers, and the conservation value of this habitat is similar to forest. Thus, it is critical to maintain and protect both forest and shade-grown coffee to stem the decline in migratory bird populations.

Unfortunately, shade-grown coffee plantations are a disappearing refuge for biodiversity due to the global increase in coffee demand, and changes over time in how coffee is cultivated. Until the 1970s, all of the world’s coffee was grown underneath forest canopies across the most biodiverse regions of the world. Today, however, three-quarters of the world’s coffee is grown in the full sun or low shade. This intensive mono-crop farming drives deforestation, and thus the decline in wildlife populations. To address the loss of shade coffee plantations, conservation and coffee certification programs have been developed to provide economic incentives to coffee farmers to keep native trees in their plantations. However, there is an excess of shade-grown coffee available, because demand is insufficient. We must take action quickly, because this lack of demand is a risk to the trees in these plantations. With no buyers for surplus shade-grown coffee, farmers might convert their plantations to other crops and pastures. Not only will the conversion of shade-grown coffee plantations result in a loss of forest cover, it will have a negative impact on North American forest-dependent migratory species, such as the Canada Warbler and on resident wildlife.

The findings of my research demonstrate that by making informed ethical coffee choices we can be a part of the solution to conserve the winter habitat for migratory birds. Furthermore, shade-grown coffee plantations capture more carbon than conventional farming, and increase farmers’ ability to adapt to climate change by protecting crops from raising temperature. Smallholder farmers in the tropics are one of the lowest income groups in the world and they would also benefit from the economic incentives of shade-grown conservation programs.

Our coffee might be stronger than we think, and we have the power to maintain and increase the number of trees in the tropics one cup at the time. As demand for shade-grown coffee increases so will the canopies and suitable habitat for migratory birds. 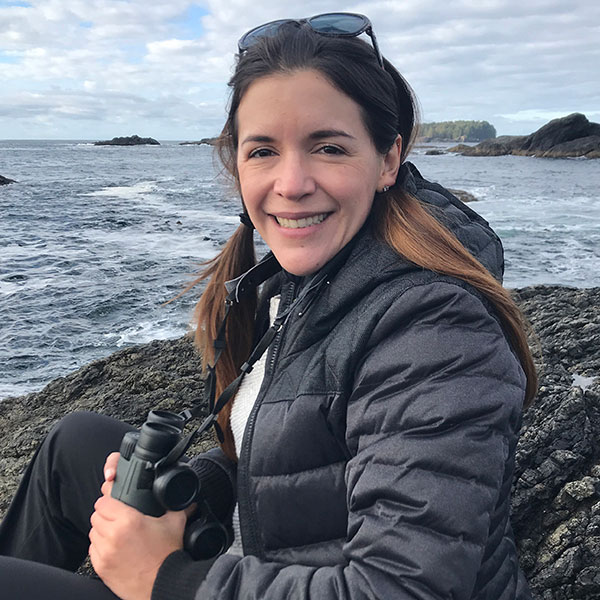 We can change the world by wisely choosing to drink shade-grown coffee
Nominated by the American Ornithological Society
Dr. González integrates behavioral and demographic field data with tracking techniques to provide foundational scientific information needed to support international and local conservation strategies for several Neotropical migrants of conservation concern. Her research experience spans from her natal Colombia to North America during the full annual cycle of migratory birds.

I’m a conservationist at heart. My passion for coffee and nature was fostered at an early age by my grandfather, a dedicated coffee farmer, who valued the importance of connecting with nature and people. I was extremely fortunate to learn about bird banding at Klamath Bird Observatory back in 2005, after that I decided that I wanted to study bird migration. While conducting my research I was fascinated by how birds connect coffee, coffee farmers and coffee drinkers across the world, and by how we can use that connection to conserve tropical forest.

Coffee production occurs on a large scale in tropical mountains, one of the planet’s most biodiverse regions holding critical habitat for migratory birds during the non-breeding season. Communicating the links between coffee, birds, and tropical forests informs coffee drinkers, producers, and distributors about available options to reduce the environmental impact of coffee consumption and address ongoing deforestation. Coffee drinkers need help to obtain clear, credible and verifiable information about “shade-grown” coffee certifications and to make better purchasing decisions. Informing consumers would ultimately ensure that certification labels take realistic steps towards sustainability by developing standards that guarantee that coffee is truly grown under a shade that provides habitat for migratory species. This could impact 25% the world’s land dedicated to coffee cultivation which is currently managed under traditional shade systems. Shade-grown coffee is also a critical climate change adaptation strategy for the sustainability of the coffee industry. Coffee drinkers have the power of increasing demand and influence producers and distributors, which would result in an increase in trees in the tropics which is one of the most effective strategy to mitigate climate change.